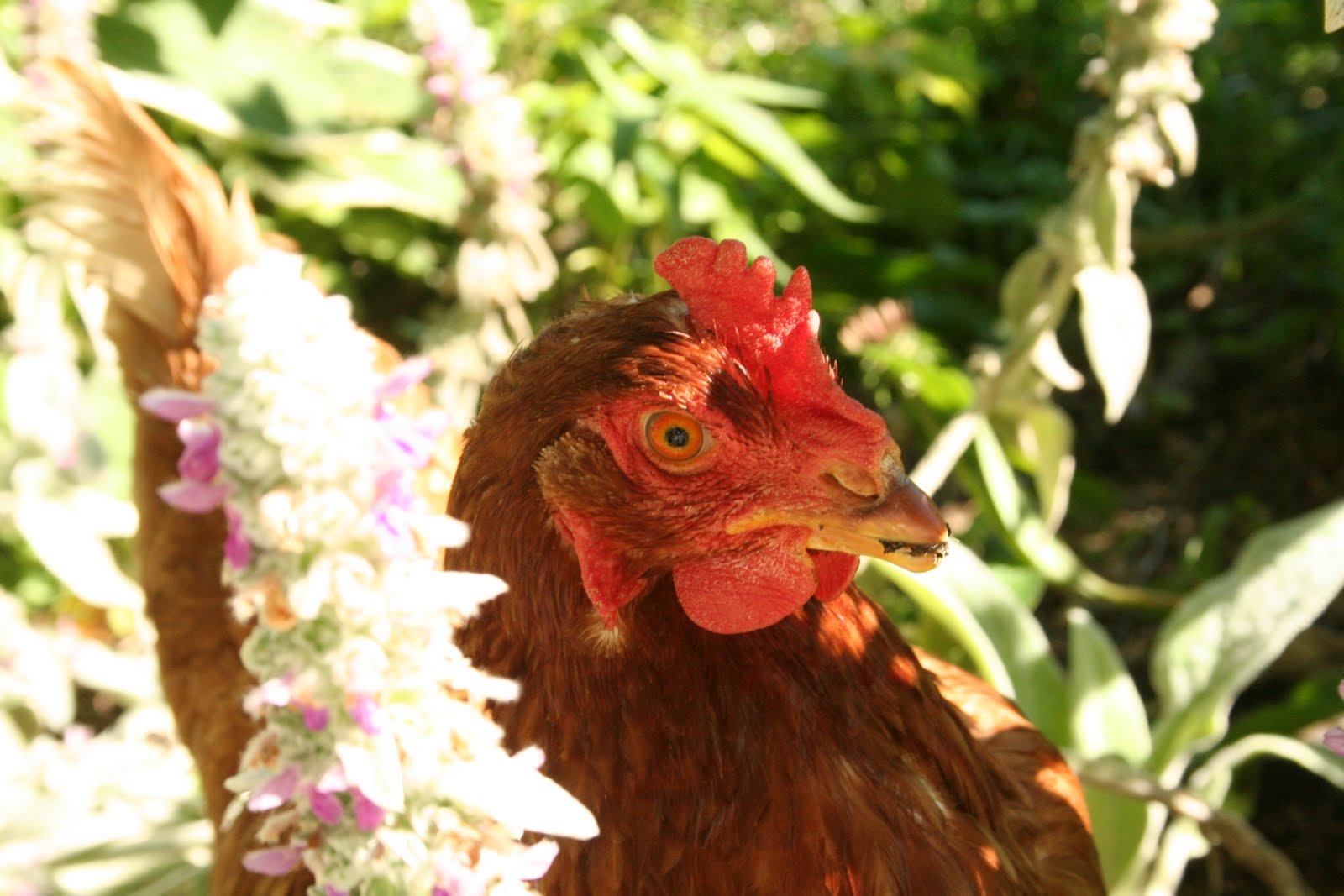 I recently rehomed our flock of chickens, who are now happily clucking away at Bluebird Farm. They are also laying prodigiously, so we know they've settled in and are happy.

Back in March when Rachel and David took the chickens, I couldn't come up with a cash value number. I really had no idea what they were worth, on the market generally or to me personally, so Rachel offered me three Romney fleeces from the spring shearing. Sold!

Shearing happened last Saturday, and I spent a pleasant couple of hours this afternoon picking over the fleeces with Rachel, removing balls of lanolin and bits of hay. (Also poop. These are sheep, after all).


These three fleeces are destined to become quilt batts, the innards between the pieced top and the counterpane bottom, the innards that make the quilt warm. Adam's friend Jen offered to make quilts from his prodigious collection of interesting t-shirts for the girls and a quilt from his button shirts and some of my old clothes for me. There is enough fleece to make batts for these three quilts and also batts for Jen to keep for her own use.

I will have to pay the mill actual cash for processing, but the other exchanges in this chain are forged by friendship, trust, and the barter economy. Each trade is equitable because each party has a surplus of the other's need, and each is satisfied at the end. It's a pretty great way to turn chickens into quilts.

Pardon me while I turn this blog into a soapbox for a moment.

Rabies is one hundred percent deadly in humans once symptoms appear. This fact is key, and you should keep it in mind as I tell you the rest of this story.

When I went to bed Friday night (Saturday morning, really), Sofia was already in my bed, so I pushed her over to make room for me, and then Buttercup and Jack stood on me until I made room for cats. All in all, a normal night.

I hadn't been asleep for long when I woke up to the sounds of thumping and chittering. Buttercup was hunting something underneath the old sewing machine table that I use as a nightstand, and I had no idea what it was, but it didn't sound like a mouse.  By the time I woke Sofia up and got her moving toward the door, Buttercup had chased whatever to the coat tree. When I followed her intense gaze upward, I saw a little brown bat hanging from my dress.

Even not very awake, I knew I wanted to isolate the bat, so I got Sofia to her room and closed the girls' bedroom doors. Then, I crawled back into my room, got both cats out, closed the door. So far, so good.

I sat down in the hall to wake up and think:
Fact: my bedroom door doesn't latch closed (we never got to the doorknob installation part of that remodel)
Fact: bats can fly through spaces as narrow as half an inch (like the gap around my door)
Fact: Buttercup was pretty determined to get back in
Fact: bats are challenging for cats to kill because they can wrap themselves in the leather armor of their wings

Buttercup's been fully vaccinated, so it was tempting to let her have at, but she's not actually very good at killing things. (Hunting and maiming, yes; killing, not so much.)

I peeked in and saw the unmistakable shape of bat swooping near the ceiling.

New plan: I woke the kids up, and took them and the cats downstairs and closed the stairs door. Then I army-crawled across my room to open the window that doesn't have a screen, grabbed my blanket, crawled back out, and went to sleep downstairs on the couch.

That open window was a critical tactical error, friends. Critical.

When I talked about this adventure online, a field scientist friend pointed out that I should have caught the bat and turned it over to appropriate authorities for testing, and that since I hadn't, I should probably consider rabies prophylaxis for Sofia and for me. I was skeptical, so I did some research.

The nurse on call at my doctor's office on Saturday morning said no shots unless I could find bites or scratches on myself or Sofia, but she couldn't really tell me what to look for. I looked but couldn't find anything suspicious.

But then I read The Washington Post's article about a woman who had an experience very similar to mine and opted for the rabies prophylaxis series despite the lack of visible wound. The CDC guidelines suggest the shot sequence even if there is no apparent wound when a bat is found in a room where someone has been asleep.

I went to bed Saturday night resolved to make a decision on Monday when animal control and the doctor's office would be open.

And it happened again.

Same time of night, same thumping and chittering in the corner. I made sure the kids' bedroom doors were closed, got the cats downstairs, and closed my latchless bedroom door, hoping to trap the bat so I could have it tested this time.

The county animal control voicemail message directed me to call county dispatch after hours, but county dispatch was no help and little comfort. The officer I spoke to said that animal control won't come out "for just a bat," and he didn't know who would test it for rabies if I caught it. He suggested an exterminator and a local vet. I thought, Um, thanks a lot. Don't you know that rabies is nearly always fatal in humans?

So I called my sister (who lives next door and works second shift and was still awake).  My awesome sister and brother-in-law and I thoroughly and carefully checked the room for a roosting bat, but saw no signs. I slept on the couch, and we checked the room again during the day Sunday, but still found nothing.

Today I called the county health department whose rabies expert said that Sofia and I were definitely candidates for post-exposure rabies prophylaxis and then helped me make arrangements with the local emergency room to get the shots. Three cheers for Julie at the health department. She is awesome!

Dear heaven, the shots! Though, it's not as bad as it used to be (many injections through the abdominal wall), it's still a lot of painful (and expensive) pricks. The standard of care is now immunoglobulin at the wound site on day 0 and vaccine in the arm on days 0, 3, 7, 14, and 21. Since we had no apparent wounds, Sofia and I got the immunoglobulin in the glutes. Being small, Sofia got one on each side. At 155 lbs., I got two on each side. Immunoglobulin is thick, and there is a lot of it.

It is highly unlikely that bats will bite humans without provocation. It is highly unlikely that bats actually have rabies (less than 1% of the population in general, 6% of those tested in Michigan). The bat (or bats) that were in my bedroom probably live in my attic and were trying to find their way out, having just woken up from hibernation. There is a strong impulse to live and let live; nevertheless, as the CDC notes,


Once clinical signs of rabies appear, the disease is nearly always fatal, and treatment is typically supportive.

There is no possibility to wait and see.

The first people I talked to, my family doctor's nurse and the county dispatcher, did not see this situation as critical at all. These two people made me think perhaps I was overreacting. However, once I spoke to people who were knowledgeable about rabies and the CDC guidelines, Julie at the health department and the ER nurse and nurse practitioner, the tenor of the conversation shifted to one of urgency. Shots. Definitely. Today.

Even people who work with and respect bats agree that bats found in rooms where people are sleeping should be caught, euthanized, and tested for rabies. I'm frustrated that the health care worker and the first responder I spoke to first did not know this information. They should know.

We should all know, because when you're woken from a sound sleep at two A.M. by a bat in the bedroom, you're operating on instinct, not on Google, and my instinct was to get the intruder as far away from my family as possible. When this happens again (as I'm sure it will), I'll know better.

Because it's spring, I had to prune the grapes. Because I've never pruned grapes, I called in reinforcements.

me: Rachel, can you help me prune the grapes?
Rachel: Sure! Kate, I've never pruned grapes. Do you know what to do?
me: I have no idea. I've never done it before, either. I'm going to ask You Tube. We'll figure it out. I believe in us.

Girl Power Day often starts like that. Sometimes one or the other of us has done the task of the day before, but even then we're not experts. So far we've refilled propane cylinders at the gas company, hauled mill ends from the Amish cabinetmaker, spread manure on the pastures at Bluebird, taken junk to the dump, pitched canvas tents, baked in the masonry oven, and pruned grapes.

1. I can do almost anything if I educate myself and get the right support.
2. Just because I can do a thing doesn't mean that I have to like doing it or that I should commit to doing that thing all the time.
3. Sometimes the right support is just someone to make decisions with.

Because Adam and I had worked so hard to be interdependent, and because I had gotten so used to having a partner, it has been hard for me to remember what I'm capable of. It is the confidence generated on Girl Power Days that carries me through some of the physically and emotionally challenging tasks I undertake on my own.

a glimpse of remembrance 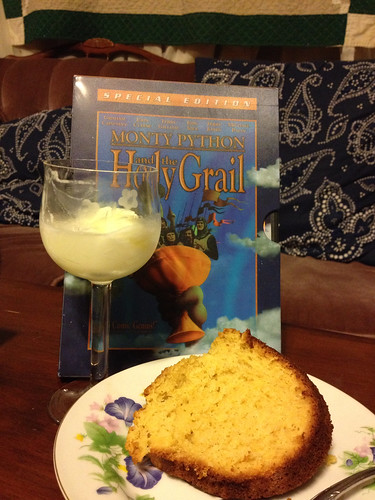 Happy birthday, my love. Godspeed.
Posted by Катя at 10:40 PM No comments:

a glimpse of transition 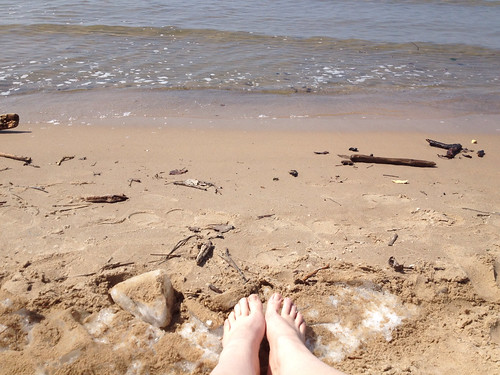 Yes, that is snow in the sand under my toes.

Yes, bare feet and a wool sweater are totally logical on the shores of Lake Michigan in April. 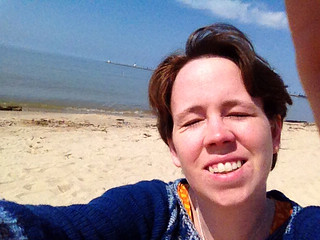